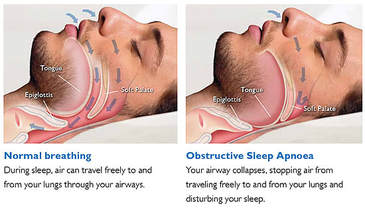 Overview
Sleep apnea is a potentially serious sleep disorder in which breathing repeatedly stops and starts. You may have sleep apnea if you snore loudly, and you feel tired even after a full night's sleep.
The main types of sleep apnea are: If you think you might have any form of sleep apnea, see your doctor. Treatment can ease your symptoms and may help prevent heart problems and other complications.

Symptoms
The signs and symptoms of obstructive and central sleep apneas overlap, sometimes making the type of sleep apnea more difficult to determine. The most common signs and symptoms of obstructive and central sleep apneas include:
When to see a doctor
Consult a medical professional if you experience, or if your partner notices, the following: Many people don't think of snoring as a sign of something potentially serious, and not everyone who has sleep apnea snores. But be sure to talk to your doctor if you experience loud snoring, especially snoring that's punctuated by periods of silence.
Ask your doctor about any sleep problem that leaves you chronically fatigued, sleepy and irritable. Excessive daytime drowsiness (hypersomnia) may be due to sleep apnea or to other disorders, such as narcolepsy.

Causes
Obstructive sleep apnea occurs when the muscles in the back of your throat relax. These muscles support the soft palate, the triangular piece of tissue hanging from the soft palate (uvula), the tonsils, the side walls of the throat and the tongue.
When the muscles relax, your airway narrows or closes as you breathe in, and you can't get an adequate breath in. This may lower the level of oxygen in your blood.
Your brain senses this inability to breathe and briefly rouses you from sleep so that you can reopen your airway. This awakening is usually so brief that you don't remember it.
You may make a snorting, choking or gasping sound. This pattern can repeat itself five to 30 times or more each hour, all night long. These disruptions impair your ability to reach the desired deep, restful phases of sleep, and you'll probably feel sleepy during your waking hours.
People with obstructive sleep apnea may not be aware that their sleep was interrupted. In fact, some people with this type of sleep apnea think they sleep well all night.

Central sleep apnea is a less common form of sleep apnea that occurs when your brain fails to transmit signals to your breathing muscles. This means you make no effort to breathe for a short period of time. You may awaken with shortness of breath or have a difficult time getting to sleep or staying asleep.

Risk factors
Sleep apnea can affect anyone, even children. But certain factors increase your risk of sleep apnea: